In 2007, I decided to travel to the coast of Peru in order to gain more knowledge about falconry. At the beginning of January of the same year I landed in Lima, where the experienced falconer Denis Cisneros Alcazar, owner of the breeding center Zoocriadero El Aleto was waiting for me. We agreed that I would take a course of altanaria with peregrine falcons for two months, and in this period we created bonds of friendship and a strong common passion: falconry. And this made me extend my stay in that country for a year, and I am very grateful to Denis and his family who welcomed me so well. Of course, because of this, I was able to get an incredible experience where I could live the falconry intensively day after day in all aspects, so I want to share with you, readers of the "Falconry Journal" a little of my experience.

As soon as I arrived I came upon two peregrine falcons waiting for the beginning of the taming process, a male of Falco peregrinus cassini and a female of F. p. tundrius and then I soon started to train them. However, the female I had called Cremolada stood out and I didn´t know at that moment that this wonderful bird would be so special for me for the rest of my life, with her I believe I enjoyed the most beautiful moments of this sport. Cremolada reached a climax in her spectacular training, she flew well-muscled and achieved great success in her hunting, with her I was able to capture my first duck in waiting on, but also did not hesitate to dive with all her fury against prey, such as herons, seagulls, southern lapwings and Zenaida doves (Zenaida sp). 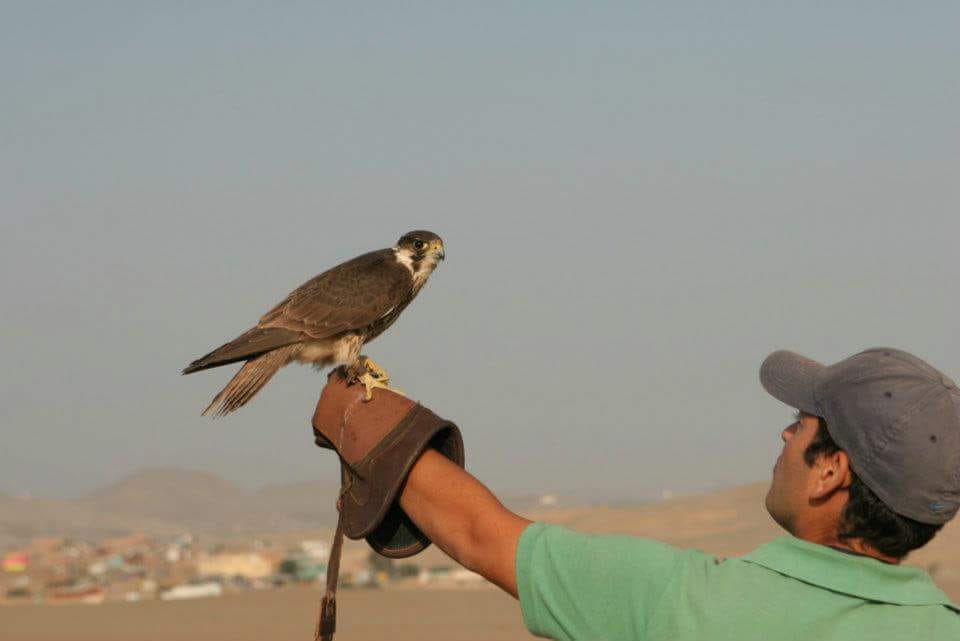 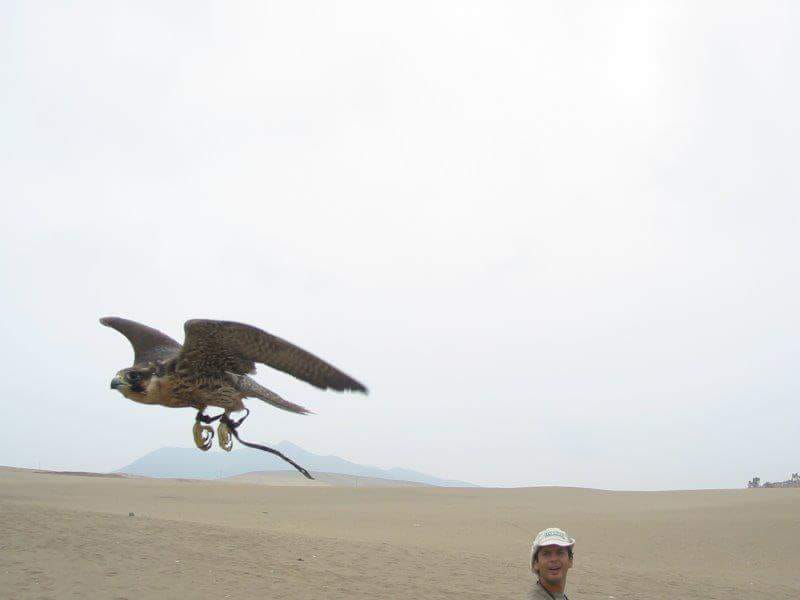 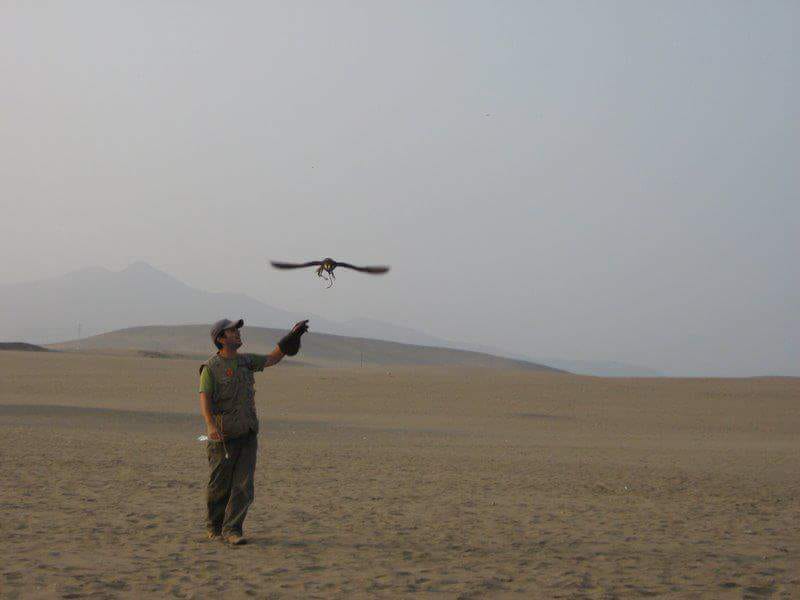 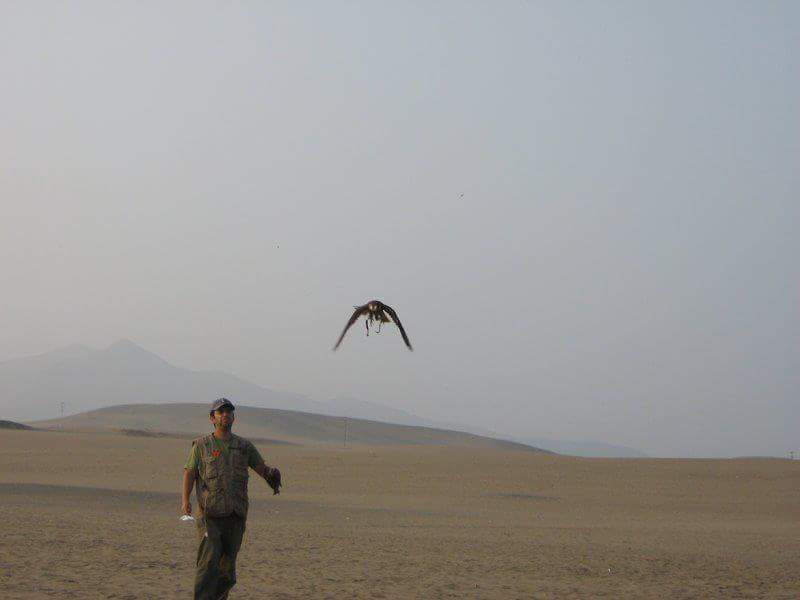 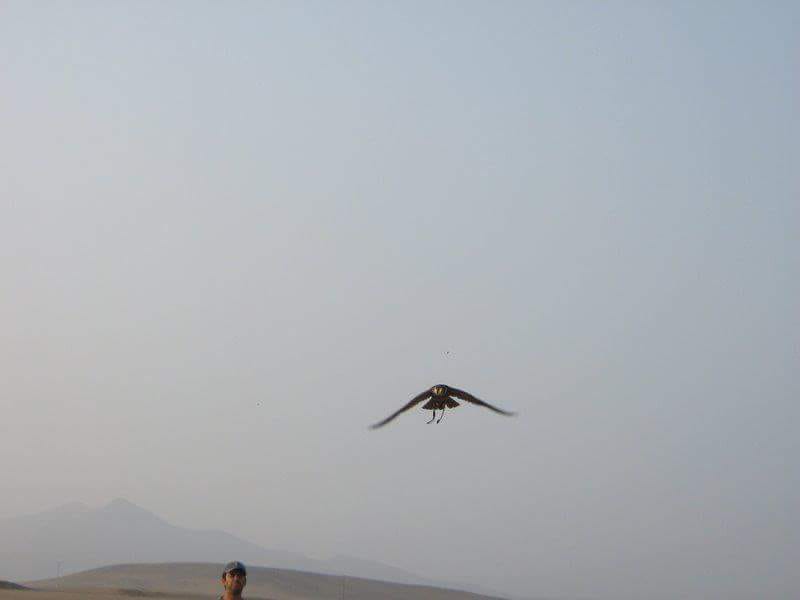 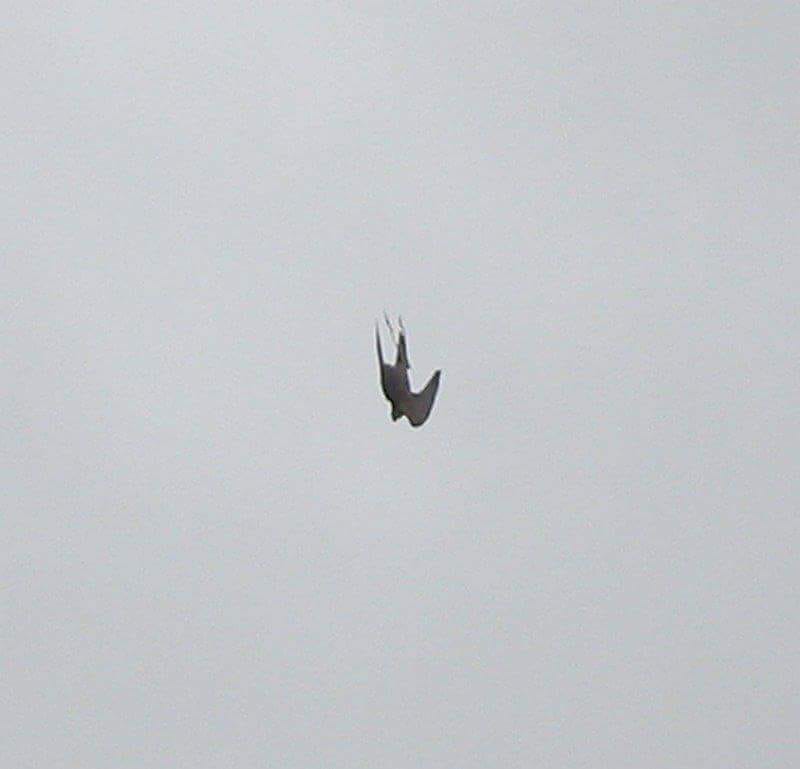 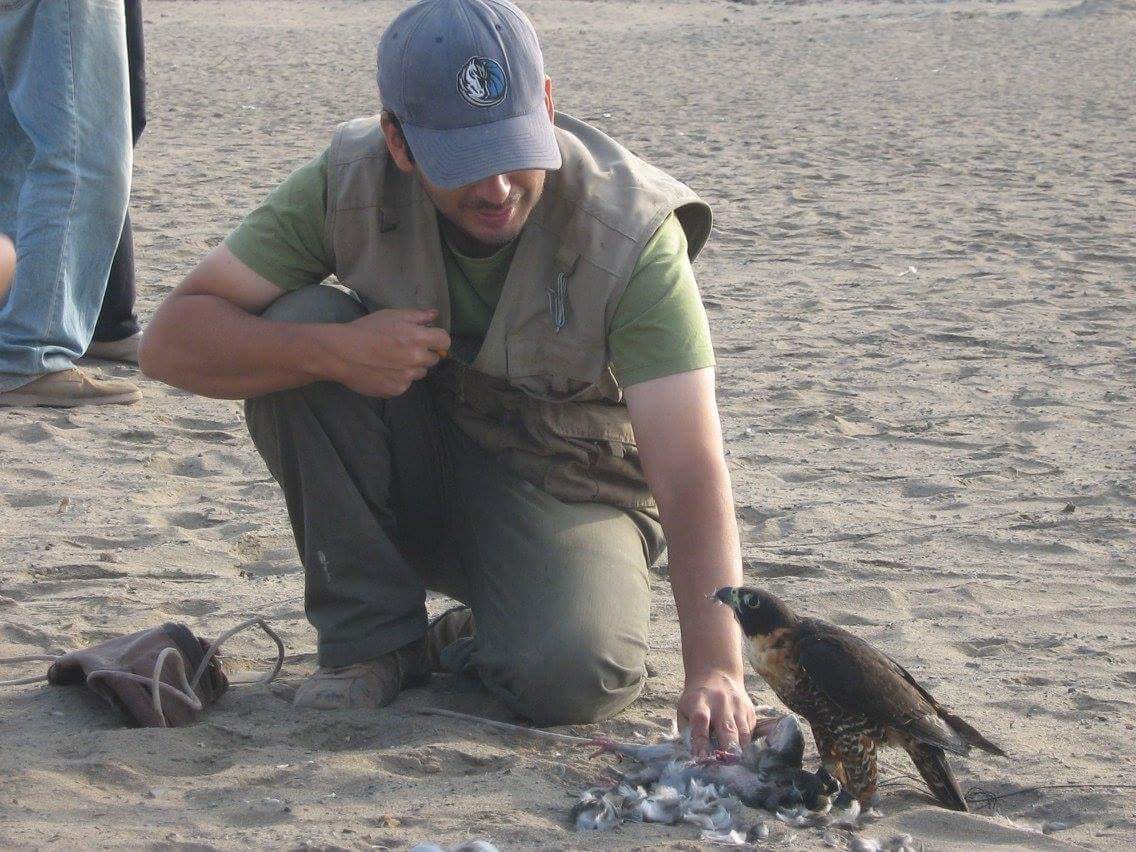 One day, in one of those fateful days that falconry reserves for us, Cremolada got lost, we were looking for ducks in a restinga region when she decided to invest against a flock of seagulls that saw her and took flight, even with our intense calls her mind was only stimulated to that tempting flock that was flying in groups in circles, but still motivated by hope we continued to call her incessantly and we had no answer until Cremolada was lost from our sight. She had already lost herself once more, when a female peregrine falcon of the subspecies cassini attacked her during a training, and the two flew away in one direction, we recovered our mistress after a few days, which made us hopeful in recovering her again, but unfortunately the time passed and we had to accept our Cremolada was lost forever.

Cremolada was a pride for me, Denis Cisneros highly praised me for the work I conducted with her, but the fact is that she was such a special bird, so ferocious that this facilitated a lot my work, Cremolada was nicknamed by those who saw her flying from "The Beast". However, despite the affection we had for Cremolada, there were many others hawks that we flew, I had the opportunity to train and fly a dozen peregrines in wait on during the year, obviously not all falcons were able to hunt, but I could see the difference of the capacity of passengers for the captives as well as the Tundrius for the Peruvian cassinis. Considering the passengers between Cassini and tundrius, individuals of the latter were more likely to escape and had greater potential to reach higher heights, also a wider range of possible prey, as they attacked larger prey , in relation to the captives ones such differences were minimized.

However, I could not fail to mention the other species I had the pleasure of manning like some harris´s hawks, especially a male nicknamed Gunter of incredible performance, as well as American kestrels, bicolored hawk and even two females of orange-breasted falcons. This last species I was able to train until the introduction of bagging, there was no time to hunt with these two individuals, it was still a privilege and showed me the dimension of the potential of the species for falconry. From the quantity of birds mentioned, I think I could give an idea of what I said in the first paragraph about living falconry intensely.

Among training, field trips and socialization within the community of Peruvian falconers, I was able to understand the development of falconry in that country. I met older falconers like Denis's uncle who introduced him to the art of falconry (unfortunately I can not remember his name) along with Lucho Bertocchi, who was also his master and Oscar Beingolea's partner who became known to some Brazilian falconers as he had trained some of the first specimens of Falco deiroleucus in falconry.

Next, Denis and his generation had great importance for Peruvian and South American falconry, along with their hunting and support partners of José Antonio Otero, who provided infrastructure and made possible the breeding of probably the first aplomado falcons in South America. This promoted the creation of one of the largest reproduction centers of birds of prey in the world, the Zoocriadero El Huayco, owned by José Antonio Otero, which I had the privilege of visiting and got impressed not only with the size of the breeding place, but also with the reproductive success of incredible species such as Andean condors, forest eagles (Spizaetus sp), among others.

Another highlight of this generation was José Luis Gagliardi, who promoted Peruvian falconry to the rest of the world with very well made publications where one could notice the singularities of the hunting grounds present in the country, and the suitability of the South American raptor species for hunting in such areas.

Talking again about prey, besides ducks, Peruvian thick-knee (Burhinus superciliaris) and columbiformes, there were many passerines, such as from the genus Mimus, Sturnella, Troglodites, Volatinia and the birds of the genus Rallidae, and as a curiosity I can also mention the massive presence of Groove-billed ani (Chrotophaga sulcirostris).

The main hawk used to hunt these species was undoubtedly the Harris´s Hawk (Parabuteo unicinctus), preferred by the more experienced falconers up to the beginners for the ease of acquisition, reproductive success and adaptation to flying in the rugged and semi- urbanized Peruvian coast.

As I said before, we flew many peregrines and it was always a challenge when we raised them high in the heights near large hills and urbanized areas, because of this we lost them sometimes, and it was very hard to recover them. When we flew them in areas where there were columbiformes and passerines that hid frequently between the low vegetation in fast and short flights, it forced the peregrine falcon to lower its height shortening its dive against the prey in order to achieve greater success and, when flying in areas to hunt ducks, where higher altitude is more interesting, the falcons could exhibit the unwanted behavior of not elevating much when addicted to the passerines and columbiformes of other fields. We had to be very temperate in training so that they would become versatile and thus respond satisfactorily to our goal.

Alexandre Crisci Pessoa on the right,

and the Peruvian falconer Denis Cisneros Alcazar in the middle.

Unfortunately I could not witness hunting in the mountainous region of the country where the falconers go hunting a kind of partridge (Nothoprocta ornata), Denis told me that he made some expeditions to hunt in this region where they use harris and aplomado falcons (Falco femoralis pichinchae), in addition to having captured a specimen of partridge while working in bird control at an airport in the north of the country. Denis explained that some falconers had difficulty flying such species because of the low relative density of air in this region and the lower concentration of oxygen, but that it was quite possible.

In memory of Armando Alcazar Dorador,

uncle of Denis Cisneros, one of his masters in Falconry.

In my farewell I won two harri´s hawks from the breeding center, but at that moment the importation of birds to Brazil was suspended, different from today. It is impressive to note the growth of falconry here in Brazil since that time. Not long ago we were in an internet group about falconry at the Yahoo portal where we dreamed of commercial reproduction of birds in Brazil and importation, nowadays we have very well established breeders who have been breeding birds for years and imported birds of the most diverse species arrive annually. If it was nowadays I might not even think of traveling due to the growth of national falconry, but the preciousness of the experiences and friends I have made is immeasurable, I returned to my country leaving much of my heart in Peru and with the friends I made there.

In my learning I was influenced by great professionals, but I express my eternal gratitude to Denis Cisneros and Ronivon Viana da Silva. These ones I have the privilege of calling them masters.

Alexandre Crisci Pessoa is a biologist,

lives in São Paulo and is currently providing advice in Pidgeon control through falconry.